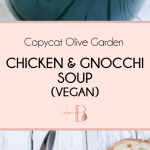 Pregnancy has come with some odd cravings. They definitely haven’t all been nutritious and some of them leave my husband looking at me all disgustedly. Example: Mac & cheese with hotdogs and ketchup all mixed up in the same bowl. Yep.

Mostly, I crave familiar comfort foods from when I was growing up.

Honesty hour: I wasn’t vegan until age 24, so my favorites growing up weren’t vegan either. To be completely honest here, I’ve had cravings for things that aren’t vegan. However, I’m not giving up my ethics and I want to have a vegan-from-conception baby, so veganizing some of my old favorites has been the only option. 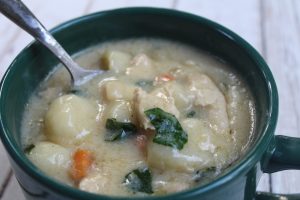 Veganizing Olive Garden’s chicken and gnocchi soup is just what I did. This soup tastes exactly the way I remember it tasting when I’d eat at Olive Garden with my family or on dates early in mine and Alex’s relationship.

The only significant difference you can expect if you make this is that I intentionally left out the celery from the original. You won’t find celery in my kitchen. Alex and I even joke that it’s not vegan because we dislike it so much. 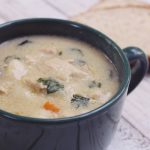 *I've used this and this in the past with success.  **You can find vegan half & half in stores, or you can do what I do. Just mix 1 1/4 cup unsweetened nondairy milk and 3 tbsp melted butter ***The salt amount you'll want to add here will vary based on what broth you have chosen and how much sodium is in there. I didn't use any when I made this recipe. This will all be based on your preference.
Tweet
Share
Pin
Share
Categories: Entrees
Tags: chickencopycatfallgnocchiheartyolive gardensoup

Just made this tonight and it is so delicious! I accidentally left out the celery because it wasn’t in the directions, so I made it just as you intended, I may add it next time. Such a perfect fall comfort food. Thank you!

So glad to hear that you enjoyed it, Tiffanie, and glad to hear you plan to make it again. If you like celery, I say go for it! 🙂 I just personally can’t stand it, haha.

Thank you for the kind review. 🙂

So delicious! Olive Gardens chicken gnocchi is something I’ve really missed since going vegan and this really hit the spot. I added celery and used Califia “better half” half & half. It made it a little sweet but I added extra onion powder and garlic salt to make it more savory. The “not chicken” base also helped. Will definitely be making again!

Thanks, Anna! I’m so glad to hear this hit the spot. Their chicken and gnocchi used to be my very fave too.

My husband and I joke around here that celery isn’t vegan because we both can’t stand the taste, haha, but I’m glad to hear it worked for you!

Hole Food Bakery is adding a member to our crew. 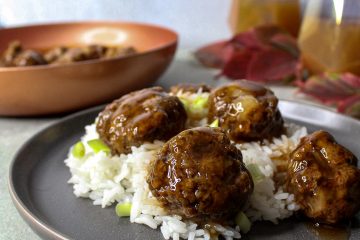 These high-protein baked vegan apple cider meatballs are full of fall flavors and smothered in a tangy and sweet apple cider glaze. They are perfect for the holiday season.  Vegan meatballs sounds like an oxymoron Read more… 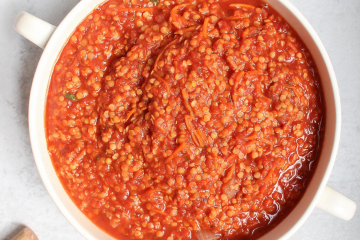 This vegan Merlot lentil bolognese is a rich, hearty, and savory sauce that pairs perfectly with pasta, zoodles, or a baked potato. The recipe is both protein- and vegetable-packed, making it both satisfying and flavorful.  Read more… 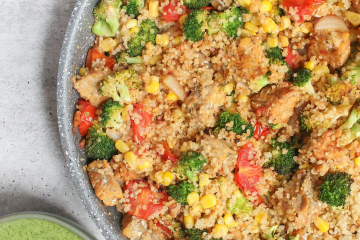 This Mexican Tempeh and Quinoa Skillet with Cilantro Lime Dressing is a healthy tempeh dish that is perfect for busy weeknights. It is also meal-prep friendly!  The most perfect recipes are all about balance. You Read more…

Hole Food Bakery is adding a member to our crew.